A hot and humid walk across the Parana river and we found ourselves in Paraguay, South America's second poorest country. Our last country to be explored on this trip in South America. Ciudad del Este borders Brazil and is famous for manic shopping. Thanks to less tax and cheaper goods, Brazillians and Argentinians frequently cross the border to snap up a bargain. We did some shopping and before we knew it, our packs were fuller.

We took a 5 hour rickety and very hot bus south to the city of Encarnación, the gateway to one of Paraguay´s main attractions, the Jesuit Ruins. Paraguay receives a small number of travellers due to it´s lack of ´big´ sights so we decided to find our accommodation when we arrived...Lonely Planet in hand, two cheap hotels are right next to the bus station. Easy. So we thought...Paraguayans don`t have access to the ocean but love their beaches, and it turns out at this time of year the river beach in Encarnación is the most popular place to be.

First hotel, fully booked, second, fully booked, the third, simply had a sign up - booked. After calling at least a dozen others (no one in town knew of any more!), trapsing from one edge of Encarnation to another and four hours later at midnight...we eventually found somewhere to stay (thanks Parana Hotel). 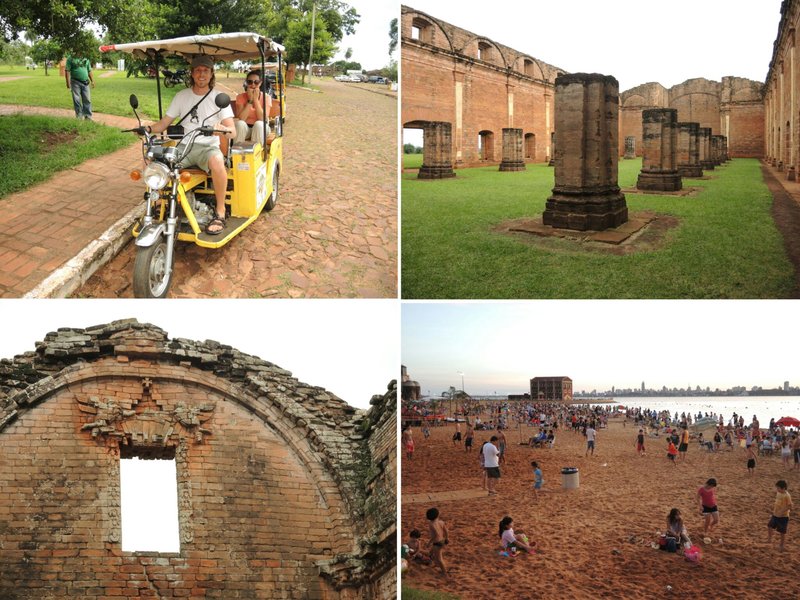 The Jesuit Ruins, a day trip from the city centre were well worth the visit. Founded by the Jesuit missionaries during the colonization of South America in the 17th century, the sight must have been very impressive until the Spanish, threatened by their power came and put an end to that. The ruins we visited are spread over two sites 12km apart and are in good condition. They are certainly unique to other ruins we have visited in South America and the special thing was that we almost had them entirely to ourselves. To get from one to the other we took a tuk tuk which demonstrated just how genuinely nice Paraguayan people are. Our friendly smiling driver chauffeured us around and asked us to write in his personal book, full of travellers messages and names. It seemed like his proudest posession. We also grabbed ourselves a few mangoes, which are abundent in Paraguay, the trees are brimming, with ripe mangos carpeting the sandy red ground.

Posted by TheNomadWay.com 16:00 Archived in Paraguay

Previous Next Table of contents

Hi There, do you speak English? What is the Liebster award? Thanks for your comment!

Comments on this blog entry are now closed to non-Travellerspoint members. You can still leave a comment if you are a member of Travellerspoint.

If you aren't a member of Travellerspoint yet, you can join for free.